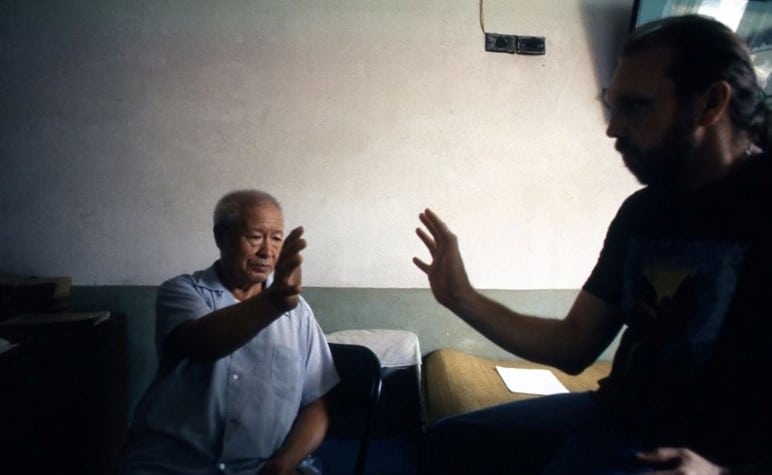 This is not intended to be complete but to give an overview of the man and his teachers.  Some of this info is from memory, some is from the Book “A Light Warrior’s Guide to High Level Energy Healing”, and some of this info about the teachers was compiled by Stillness-Movement practitioner Ben Rosen.  Please forgive spelling or date errors.

I have met many of the top qigong teachers around the world.  Teacher Wang was, in the field of Qigong, THE single most knowledgeable, compassionate yet powerful Qigong Master I have met in my 45 plus years as a Qigong practitioner, worldwide teacher lecturing about Qigong and Clinical Qigong, and my many years of running a pain clinic performing Clinical Qigong.  His Compassion was an attribute that vibrantly radiated along with his Power.

When I first met Teacher Wang Jue Min, I had gotten off at the train station and saw him standing there. Having already been a 10 plus year practitioner of Qigong, Neigong & Clinical Qigong, I was immediately floored by the size of his energy body – it was palpable & HUGE!

I walked up to him and he said, “So good to see you again my friend.”  I immediately knew in my soul that this amazing person and I had shared other lifetimes.  And I am not speaking of a thought or an induced wishful thinking as I had no preparation in which to do so.  It was an immediate recognizing deep down inside.

I had no idea that this would begin an amazing journey of discovery, and virtually change my life forever, but this post is not about me, it is about this epitome of a Qigong Teacher, Master Wang.

Master Wang told me his story, some initially, and some over the many years of our association.  And some from his friends, as Teacher Wang was extremely modest.

I will attempt to abbreviate, but know that there is indeed much more.

This amazing teacher’s story of Qigong and Medical Qigong began with a tragedy.  Master Wang was a guerilla warfare soldier fighting against the Japanese invasion of China. One night he and his fellow patriots were out on a patrol, and a platoon of Japanese soldiers ambushed them.  Many were killed, some got away, but Master Wang was shot and captured.

His injuries were extreme and he went into a coma, so the Japanese commander made camp to wait until he died before departure.  The problem for the commander was, the scoundrel refused to die.  Eventually this commander made a decision, saying he would be dead in the morning.

It “just so happened” (Destiny) that Teacher Wang’s fellow squad staged a surprise raid on the camp, and hustled Teacher Wang right out from under their noses.

But he remained in a coma.  Several doctors examined him but thought there was no way for him to live.  He did undergo surgery as his bullet wounds were life-threatening.  The bullet wounds were so bad they had to shorten one leg 5 inches.

Eventually he did come out of the coma. He told me, “After I finally could begin to walk, it was only from here to there (pointing at about a 3 feet distance).”

He did not give up hope, but did not recover until he received Medical Qigong from a Master.  He told me his recovery was miraculous.  After a few treatments, he began rapid recovery.

He was so enamored of this amazing form of therapy that he began training in qigong.  He was diligent and sought after THE most recognized teachers of his time.  And he became an enthusiastic ambassador for qigong.

These Teachers he studied with were 5 of the most amazing and accomplished qigong teachers of their time.  If you wish to look them up, you will find some VERY interesting information about their accomplishments; I will list just one or two accomplishments:

Master Hu Yao Zhen – He was nicknamed “Single Finger Shakes the World” and Founded the first Beijing Medical Qigong Hospital. “Father of modern Qigong” He studied much Taoism and also with the Taoist Temple of the White Cloud.  Coined the term “Stillness-Movement” for his later-developed culmination of Qigong and said the practice represented the epitome of everything he had learned.

Master Liu Guizhen – Director of the Tangshan Qigong Clinic and became Vice President of the Beidaihe Qigong Sanatorium.  “Father of modern Medical Qigong” Master Liu was an amazing and accomplished teacher.  Master Wang spoke very highly of him.  I encourage everyone to see the totality of his contributions.

Master Chen Yingning – One of the most influential Taoists of last century.  Spent an unheard of brief 3 years reading the entire collected Taoist Cannon (Zheng Tong Dao Zong) 1,500 texts from multiple Daoist lineages dating back to the 4th century.

Master Wang became the General Secretary of the Communist Party for Baoding City. He told me he did this because he felt he could help some of the injustices he saw with his fellow citizens, and more than anything, he wished to help them.

During the so called “Cultural Revolution” men who were doctors, men of knowledge, etc. were persecuted, jailed and tortured, or killed.  And I will say that the communist “rehabilitation” was a horrible thing of severe torture, starvation and false/wrongful imprisonment, and family relocation as slave labor.  Anyone who thinks the word means anything else needs a moral compass internal adjustment.

Master Wang was arrested and tortured, starved, and beaten, and his family relocated to slave labor in the fields.  He was jailed for a bit over 17 years.  He said his neigong practice was what kept him healthy and sane.

After release from prison, Master Wang became famous throughout China and was recognized by his peers as one of the more accomplished Masters of his time.  He was known for his ability to swim in cold water lakes in the winter and walking around without a coat in the winter.  He could control his body temperature with his Qi.  One of his friends showed me a picture of him naked emerging from a cold water lake which was dated in January.  His reputation as an accomplished qigong master put me in a status of also being locally known by… just about everyone.  As I bicycled around the city many would wave and call out my name as they knew I was Dr. Wang’s American student.

The hospital was a small 100 bed unit with 12 Qigong doctors and Master Wang, and two “X-Ray Vision Girls”.  No, this is not what they called themselves but was the translation.  What they were is SEERS whose talents manifested through the practice of Stillness-Movement Neigong.  They could SEE inside patients’ bodies and would describe to the doctors exactly what they saw in terms of both physicality and energy.  They could SEE the sick Qi and the doctor would then remove it with Qi manipulation.  They could SEE if a person had a broken bone or any abnormality.  This was a fantastic division of labor.  While many of the doctors could SEE, this division of labor allowed them to see more patients as it does take energy to SEE.  I know this sounds far fetched to some but I can assure anyone this was exactly what happened.  They absolutely did not have access to my medical records, but they scanned me and proceeded to tell me of every single bone break I had from when I had a car wreck when I was 15, as well as other issues that I knew I had.  They said the ability came after only one year of Master Wang’s training.

The hospital doctors saw many different illness/disease, accident victims, stroke victims, brain tumor patients plus many other conditions.  This hospital became famous due to the high results and people were brought in from all over China.  Many party officials from Beijing preferred to come there versus what they considered as inferior hospitals in Beijing.  Master Wang was famous for his abilities and was recognized by his peers as one of the more powerful qigong masters of his time.  He had the title of “National Treasure”.  It was honorific but was a 2-edged sword, as it also meant he could not leave China.

I trained in the Hospital.  Although I only had intentions to become the best in therapeutics that I could, Master Wang asked me to teach and said, “NOW is the time for these ancient secret gifts to be made available in the West.”  I began teaching.

Later, when Master Wang retired, we saw many patients at his home.  He never charged patients who came to his home but they would always pay him something, sometimes a couple of chickens or whatever they had.  At his home he and I worked on many different dis-ease situations and Master Wang fine-tuned my teaching abilities.  We also performed many experiments with Qi manipulation, one seen in the pic above.

The system taught by Master Wang and now me includes energy transmission to awaken the energy body and light the fire in the Dan Tian and correct the energy flow in the students.  And Walking, Running, Multiple Movements, Sitting, Standing, and Tree Qigong.  Master Wang, to me, represented the accomplished epitome of humanity, what we all should strive to be.  His gentleness and compassion was entwined with his incredible power and knowledge, and this was a palpable thing which manifested in all his therapeutics and teachings.