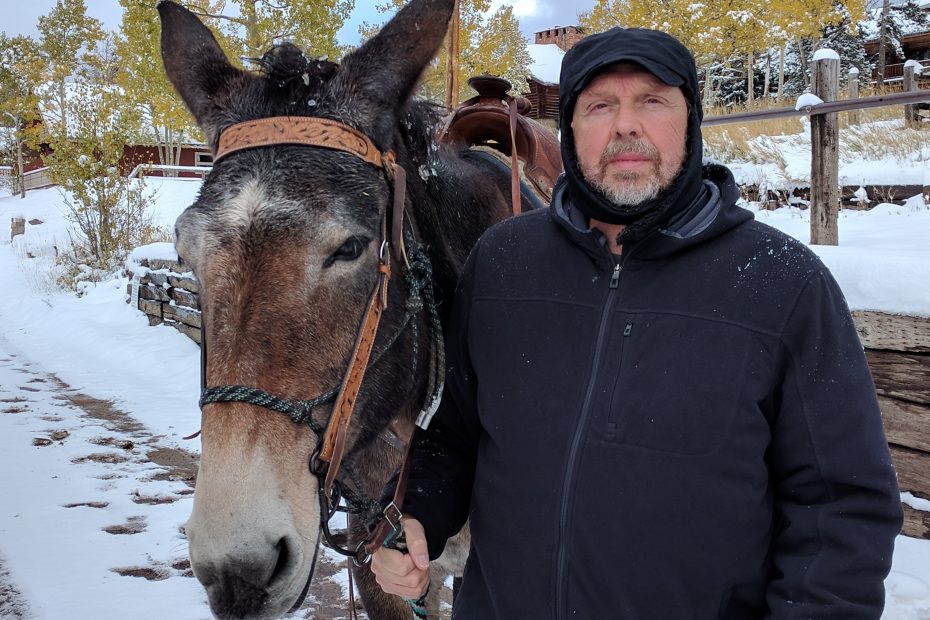 Above pic is Mary the Mule and I, and was taken a couple of years or so ago at a Stillness-Movement workshop in Colorado. It had been snowing for the last couple of days and still was, and seemed like a prime opportunity to explore the mountains.  Along with a guide with horse provided by Dao House, Mary and I went for a ride in these Shining Mountains, starting at 9,200 ft and going up. Note that on Mary, the saddle horn was almost to the top of my head; Mary is big and TALL and is obviously a draft mule!

For sure the scenery was beyond spectacular, and it was of course an amazing Spiritual experience, and it was COLD, but this is not the point of my post, which is about LISTENing!

What impressed me so much was Mary’s instinctual as well as developed knowledge; even though I have been around equine all my life, have trained horses, been a cowboy and even rodeoed in my younger years, I have never experienced this level of “sure-footedness”.  Although we rode on the ridges where one small misstep would be a fall of thousands of feet; even though the path was ripe with fallen tree limbs and false footing troughs and holes, all under snow, MARY knew EXACTLY where to put her feet and once did a small side-hop to avoid disaster. Were instinct and developed knowledge all that Mary possessed? No.

What Mary also possessed, even though a part was instinct and a part was developed knowledge, was: Mary LISTENED!

Where does this tie in with the practice of qigong?

It ties in due to the fact that humanity has a “hidden” or rather SUPPRESSED innate talent of LISTENing!

In the Stillness-Movement Neigong SYSTEM, LISTENing is a large aspect of our development. It naturally occurs through raising the energy body vibration giving us an opportunity to “tune” to the wavelength of what I refer to as “totality of perception”; these wavelengths have been suppressed through humanity’s dumbing down, with most not even realizing that wavelengths of perception exist beyond that of what the majority of humanity considers “normal”.

Just look at the total spectrum of wavelength – as described by PHYSICS – that our eyes cannot see and our ears cannot hear. Absolutely, what we see and hear is an extremely small part of “totality of perception”.

By raising the energy body vibration, and practicing LISTENing, we can actually “tune in” to these energy wavelengths and have the possibility of knowing where to be and go and what to do in any given moment. I say, “IN THE MOMENT OF THE MOMENT” is the ONLY relative “time”, as “past” and “future” are really meaningless concepts. “Past” is merely playing a video recorded by our brain (do we wish to play it over and over and over?) and “future” – no one can actually know, so whatever we project as future is unlikely to be the actual future. Our LISTENing process involves “stopping the world”, non-indulgence in mental chatter, and dampening down our brain’s frequency wavelength. This allows non-interference for us to have the possibility of this tuning-in to higher-level-beyond-limited-spectrum frequencies.

This is not a future telling or “psychic” phenomena, but an aspect of who we really are. And is ONLY valid in the moment of the moment. We Stillness-Movement Neigong practitioners, with practice of this technique, can learn to “Dance in Wu Wei”, which means we have the opportunity to achieve an in harmony of energetic flow between Heaven to Earth.

Mary, of course, had learned to dance in wu wei, and was in harmony. Virtually eliminating or as close to eliminating as can be, the possibility of chaos (non-harmony).

Michael Lomax is the author of A Light Warrior’s Guide to High Level  Energy Healing and teacher of  the internal Chinese Arts of Qigong/Neigong, with students from around the world.  click for more about Michael at www.michaellomax.com